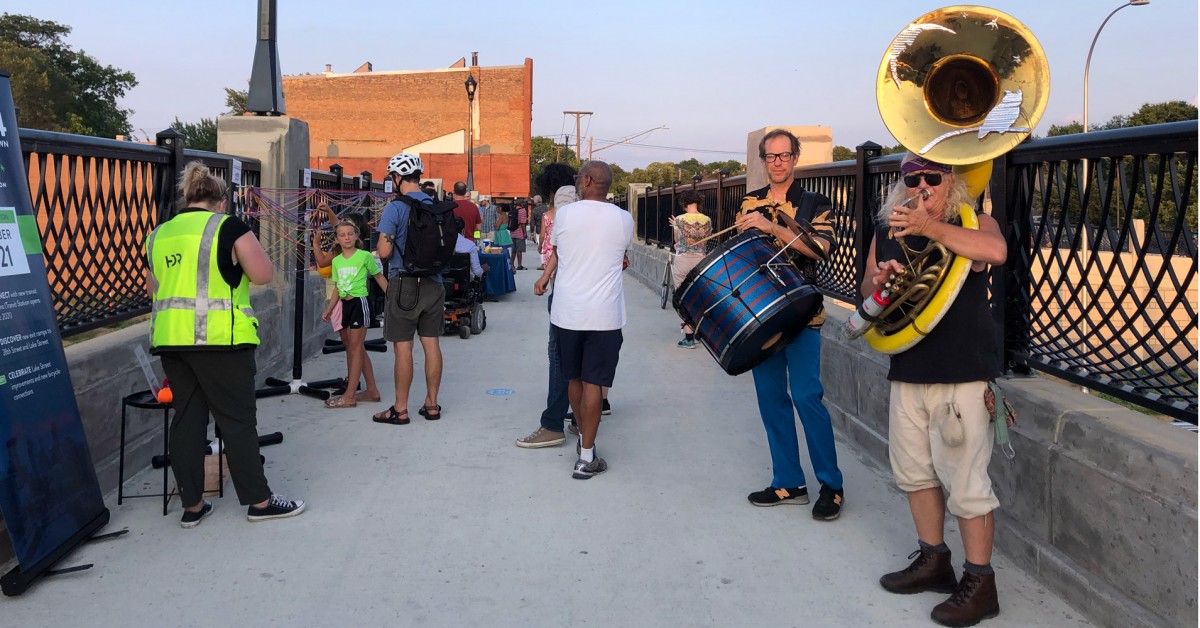 Art, performance, history and community at the reopening of a Minneapolis pedestrian bridge

If you have seen pictures of Minneapolis skyline from a freeway with streaking headlights and taillights continuously to and from downtown, there’s a good chance these photos were taken from the 24th Street pedestrian bridge over 35W. A narrow eight-foot bridge that hovered about 20 feet above the highway, it was such a popular photography spot that holes the size of a camera lens were cut into the chain-link fence that enveloped him.

When the bridge was removed in 2018 as part of the larger Reconstruction project 34W-I94, the Minnesota Department of Transportation hosted a one-day event for photographers come to the bridge one last time to capture the iconic sight. “We saved part of the link in the chain where people cut holes to save that part of the story,” said Aaron Tag, engineer for the western area of â€‹â€‹MNDOT. A replacement pedestrian bridge was completed last month and MNDOT hosted a big reopening event on August 19 that featured some of the photos taken on the last day of the old bridge.

Double Bridge party, the event, which also featured music, art gifts, and theatrical performances, was a collaboration between MNDOT and community groups and organizations designed to kickstart what Bridge Constriction was: community connections.

â€œThe old bridge was very narrow, about eight feet wide,â€ says Tag. â€œThere were stairs on one side and a small ramp on the other. It was not at all accessible to the ADA. The disconnect created by the pedestrian bridge was an extension of the disconnect and disruption that the highway itself brought to communities.largely communities of colorâ€”When its construction passed through the heart of the city in the 1950s.

â€œIf you go back in history, when 35W was built, it divided the community. Hopefully the new bridge can reconnect it at least a bit, â€Tag says.

In 2018 and 2019, the MNDOT hosted dinners at important bridges and crossroads related to the project, which Tag describes as having been a huge success. The MNDOT has learned that â€œthe more we can involve the community, the more we invest in not making it an MNDOT event, but a community event that MNDOT is a part of makes it more successful,â€ says Tag. Considering that between 300 and 400 people eventually attended the event, Bridgefest was a victory for the MNDOT.

â€œIt’s about celebrating a new connection that was there before but was not very accessible, and then it was gone for several years. We wanted to celebrate the new connection across the highway and still help people and communities on either side explore and connect with things on the other side.

Thanks to an ongoing community engagement grant that allowed MNDOT to outsource community engagement to experts, the event was ultimately a partnership between two neighborhood groups and the Minneapolis Institute of Art, the Hennepin History Museum. , the Open Eye Theater, and the American Swedish Institute, all of which are nearby.

Tag said the MNDOT worked with its partners to determine what would be the best mutually beneficial option for them to participate, one that would draw crowds to them and be attractive enough to get people to cross the bridge in the service of the global event.

In addition to scheduling an event around a construction schedule, Tag also worried about making it worthwhile for the community groups involved. â€œWhen you involve community partners who don’t have to, I hope they get a lot of benefits,â€ he says. “You hope they don’t put all that effort into it and that five people show up.”

For the Hennepin History Museum at least, the effort of involvement was worth it.

â€œThe obvious reason to engage with Bridgefest was that [the bridge] is right next to our building, â€said John Crippen, executive director of the Hennepin History Museum. “It not only fits into our content, but it was a great way to reconnect with our neighbors after a year and a half of isolation with COVID.”

Crippen says that for them Bridgefest was somewhat of a follow-up event as a few weeks before they had worked with MNDOT to bury a time capsule as part of the larger construction project.

On the day of the event, the museum was not only open, but they also set up a sidewalk table a few blocks closer to the bridge to direct people to the location. â€œWe had around 75 people throughout the event so it was a good night for us. It generated a lot more traffic, â€explains Crippen.

The event was “a great example of a Department of Transportation intentionally connecting with the community,” he said. “They put the [community engagement] resources in it. They made sure to hire a company that knew how to do this.

Cinnamon Janzer is a freelance journalist based in Minneapolis. His work has been featured in National Geographic, US News & World Report, Rewire.news, and more. She holds a master’s degree in social design, with a focus on intervention design, from the Maryland Institute College of Art and a bachelor’s degree in cultural anthropology and fine arts from the University of Minnesota, Twin Cities.

Follow Cinnamon . (JavaScript must be enabled to display this email address)

Multifamily investing trending positively in most US markets

No charge in 1st case under NYPD choking ban