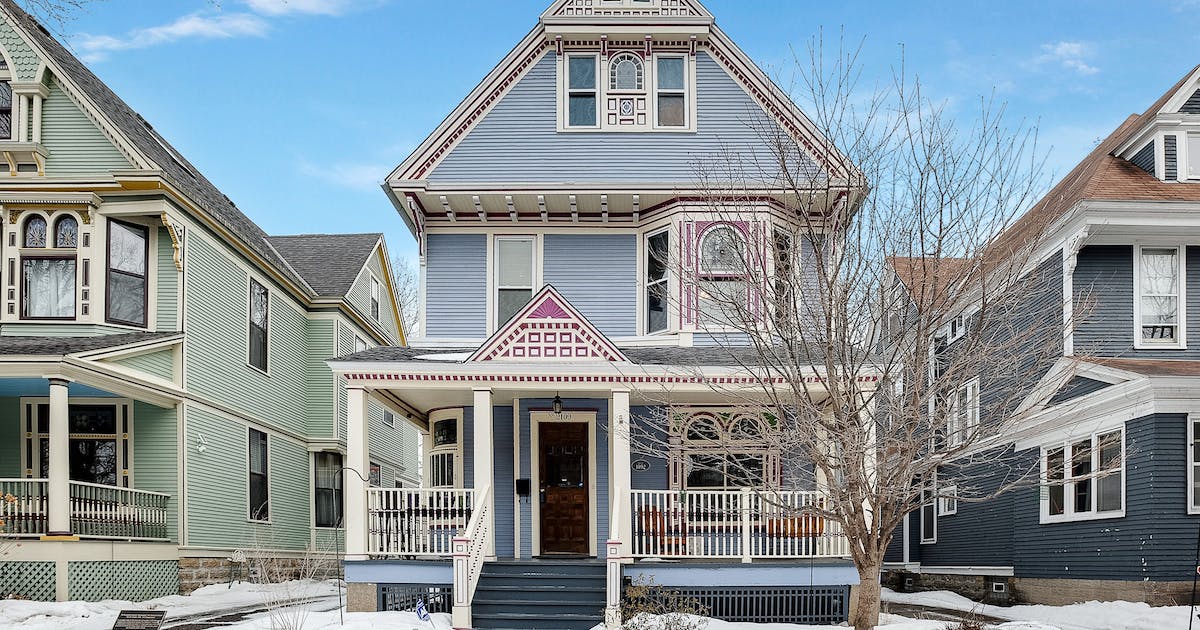 In the early 1890s, anticipation of the opening of the electric streetcar on Lyndale Avenue in Minneapolis spurred a large number of developments.

The stately 1892 homes, praised for their classic Queen Anne features, are called the Six Sisters. They have become a regular stop for house tours and history buffs as well as passers-by, who often stop to read a plaque about the houses.

With houses so distinct side by side, it’s easy to notice Queen Anne’s architectural traits, including ornamentation, asymmetrical and sculptural forms, sloping rooflines with gables and dormers, porches with decorative wood and brightly colored exteriors.

The Six Sisters also reveal a range of historic home restorations. Of the houses, four are multiplexes that have undergone various preservation and restoration projects. Two have been converted back to single-family configurations after being “painstakingly restored to their former grandeur,” according to a June 2021 article in Hennepin History, a publication of the Hennepin History Museum.

A labor of love

Ezra Gray and Christina Langsdorf restored one of these houses, which won a preservation award.

When they were house hunting 11 years ago, they were drawn to the home of 2109 Bryant. It showed its age and had been transformed into a duplex. Yet they saw the potential.

“He was a fixer,” Christina said. But “Ezra had always dreamed of fixing an old house and Queen Anne spoke to us. We can come in and do some restoration work before it’s too late to do that.”

Ezra discovered the history of the house, spending countless hours going through old photographs to see what the house originally looked like. He also studied his neighboring houses for clues of restoration.

“It was a lot of detective work trying to figure out what was out there,” he said. “We looked at the details of the other houses to make sure we were in keeping with the historic features.”

The house required extensive repairs and restorations, including the discovery of the original siding, which had been hidden under beige vinyl siding.

“Ezra repaired every missing or rotten piece of the original wood siding,” Christina said. “Then we repainted it and restored some of it to the original [decorative] parts and architectural elements that were removed during the installation of the vinyl siding. »

Inside the house, they started by restoring the floors.

“When we looked at the house, it was completely covered in beige carpet. One of the first things we did was roll out that carpet,” Christina said. “We found extraordinary floors. In the dining room there is an inlaid wood mosaic medallion. All the rooms have borders around the edges.”

They also hung up the original pocket doors, which had been removed but had been stored in the house. They removed the wall panel covering the fireplace, only to find that the mantle was missing. So they restored the fireplace with handmade tiles and branded an antique mantel from a Crocus Hill home in St. Paul.

“Someone had bought it and put it in a warehouse and 50 years had passed,” Ezra said. “We’ve tried to restore the fireplace to its original glory. We hope it looks like it’s been there all along.”

At some point in the house’s history, someone had moved and taken the majority of the stained glass with them. Ezra was able to salvage a piece of a house across the street that was to be demolished. He learned to recreate stained glass and re-sealed and refurbished the remaining windows.

“I looked at photographs forever and designed them to fit the character of the house at the turn of the century,” he said.

In the modern world

The couple also updated the mechanics, replacing many of the original windows, fitting a new roof and installing a fence. They redid several rooms by taking them down to the half-timbering.

The kitchen turned out to be a major undertaking, including restoring the ceiling to its original 10-foot height and installing tin panels.

“It looks like it’s always been there,” Christina said. Modern appliances and finishes such as granite countertops, new cabinetry, and custom drawer pulls have been brought into the mix.

Like many of the Six Sisters, the house had a dirt basement. The couple laid down a concrete floor and turned the space into Ezra’s studio.

Instead of being overwhelmed with restoration, Ezra’s passion for restoring homes only grew. In 2014, he quit his tech job and started a new company with the state, called Mill City Design, to specialize full-time in home restoration. Through Ezra’s work and research, he also became a bit of a historian, writing publications on the history of Minneapolis homes.

“We met a whole community of people who had the same interest. And just by word of mouth, I started developing a pretty good network of people who usually lived in and around Lowry Hill,” Ezra said. “That included the house next door. We did a full renovation of that.”

His work paid off. In 2021, the couple received a Minneapolis Preservation Award for Grassroots Education and Advocacy from the American Institute of Architects Minneapolis, Minneapolis Heritage Preservation Commission, and Preserve Minneapolis for their efforts.

“Ezra is an amazing researcher on top of doing the restoration work,” said Anders Christensen, board member of the nonprofit Preserve Minneapolis.

The couple often opened their home to walking tours.

“When you walk into a Queen Anne, it’s like being inside a piece of clothing,” Christensen said. “Everywhere your eyes look there is something interesting. People love the opportunity to walk into these homes. And Ezra and Christina have been very generous in letting people in and visit.”

While they loved living in their Queen Anne, Ezra and Christina move to Indiana to be closer to their family. So they put their 3,377-square-foot, five-bedroom, three-bathroom home on the market.

“The whole house looks like a work of art,” Hoover said. “Every piece of siding, every window, wall, light fixture and door has been maintained.”

The couple will take home not only memories of the hard work they put into restoring the home, but also the joy of living in such a large space.

“In the morning I would walk up and down that ornate staircase in the living room and how the sun would come into the house and hit everything – I never got used to it and kept marveling all the time we were there lived,” said Ezra. “I always dreamed of living in a Queen Anne. So I was able to live that dream for 11 years.”

Behind the scenes with the NCAA Women’s Champions