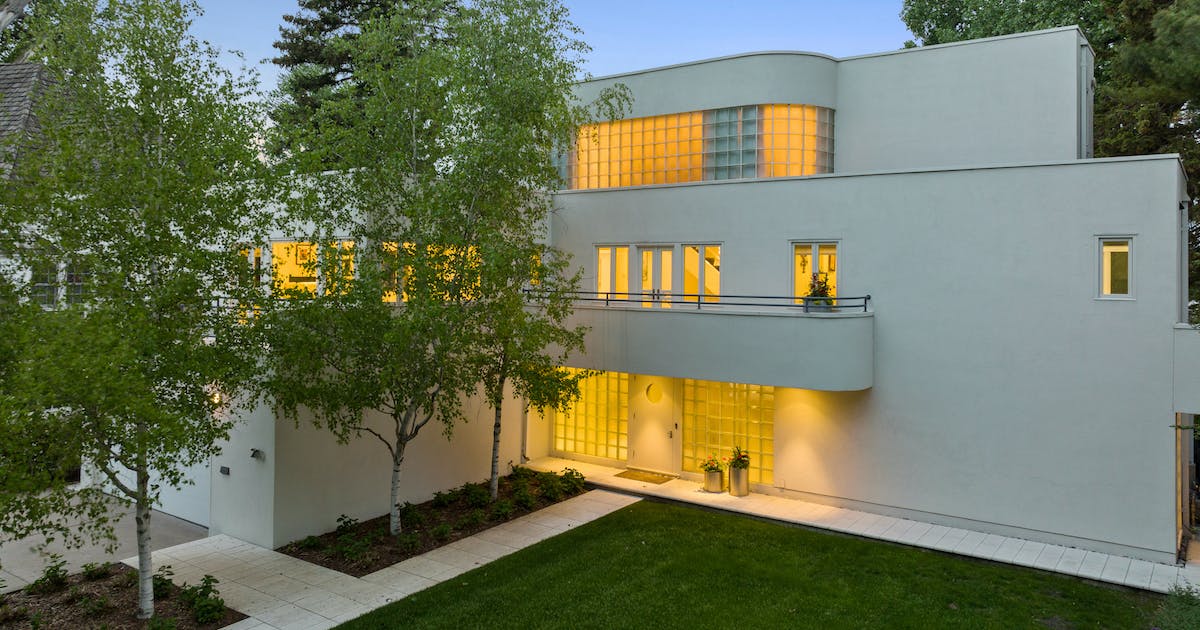 It was featured on the cover of the coffee table book “Legendary Homes of the Minneapolis Lakes”.

With its three levels, glass blocks and multiple balconies, the modern, minimal home is recognized as an example of International and Art Moderne styles of architecture, with a touch of Art Deco.

Designated a landmark by the Minneapolis Heritage Preservation, the house was considered groundbreaking when it was built in 1936, listing agent Jim Schwarz said.

Oh, and that iconic house on Cedar Lake? It’s on the market.

It’s one of the reasons art lover and owner Russell Cowles was drawn to the house four years ago.

“I fell in love with the interior elements of the house, including the polished chrome stair railings, the porthole door openings, the coved ceilings,” he said. There are “several exterior decks with curved railings reminiscent of ship’s railings, and [there’s] amazing Art Deco kitchen cabinets.”

The house is called Kaufman Lacey House, named after the original owners as well as a later set of owners who made significant updates.

In the early 1930s, original owners V. Mel Kaufman and his wife, Henet, returned from the Chicago World’s Fair inspired by minimalist designs from Europe. They hired architect James Brunet to build their home along the shores of Cedar Lake.

The house has changed hands several times since. The Lacey family added an office, enlarged the bathrooms, updated the balconies and installed a stair tower. A few years later, they added a third floor which included a master suite with a walk-in closet and en-suite bathroom, all blending into the original facade.

Like the Laceys and previous owners, the current owner has also made careful updates, refreshing the spaces from top to bottom.

The interior and exterior trim received a paint refresh. The hardwood floors have been refinished. Heating, air and electrical systems have been updated. All bathrooms have been remodeled except for the third floor master bath.

Highlights include the addition of large handmade porcelain tiles by a local ceramist in two upper level bathrooms as well as a hand painted mural, also by a local artist, in the guest room. ground floor water.

Some of the latest upgrades were inspired by Cowle’s “passion for steam locomotives and Raymond Loewy’s industrial design,” said interior designer Laura Ramsey Engler, who worked on the house. Overall, “the project aimed to stay true to the house’s venerable history, while embracing Russell’s love for art, craftsmanship and color”.

Although he oversaw many updates, there were some things that Cowles made sure not to change. The built-in kitchen cabinets, including a walk-in pantry with a porthole door, have been restored. He also restored the artistic, multicolored kitchen floor that had been installed by a previous owner.

“I loved the personal touches like the quilt-inspired tile in the kitchen,” Cowles said.

Now it’s time for Cowles to say bon voyage, as he and his wife Linda set off on a new adventure. They listed the four-bedroom, five-bathroom abode with over 4,000 square feet.

“I recently remarried and wanted a new home in a new place that we both chose, where we could have a wonderful new adventure together,” Cowles said.

New owners will likely appreciate features like two-sided fireplaces and deluxe rooms, some of which have wet bars and luxury spa-like en-suite bathrooms. And, for those who want to enjoy water activities, there is a private dock.

Schwarz said the views of the lake are majestic, whether from the landscaped deck or from the house’s many windows. Plus, “there are plenty of private balconies and terraces,” Schwarz said.