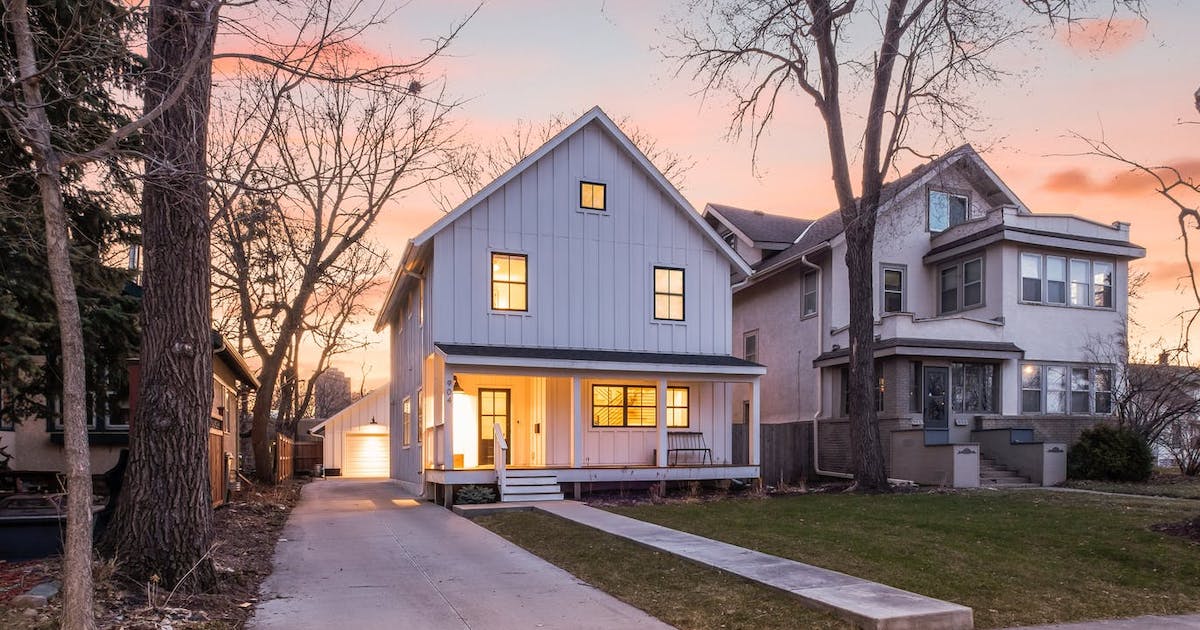 In 2014, when Melissa and Kevin Coleman moved to Minneapolis from Connecticut, they encountered a unique opportunity.

Their listing agent was also running a design and build business at the time and a house he planned to renovate was deemed unsalvageable.

“We weren’t looking to build, but he had this empty lot in the Seward neighborhood after trying to restore a house that was way too gone,” Melissa said.

The Colemans decided to seize the moment and work with their agent, Michael D. Smith, to build a new home that worked for their family and was neighborhood-wide.

“He had plans, but the style was too modern for us,” Melissa said. “Our hope was to visually build a house that would pull in really classic elements with layers of modern touches, a mix of old and new. The end result was a modern farmhouse.”

For modern touches, a white and black color scheme and iron details were incorporated into the home. Traditional accents included restored vintage pendants, a subway tile backsplash, and red oak flooring that was “slightly flawed because we wanted the knots,” Melissa said. “We picked a lot of things that were classic and will stay classic.”

As for the floor plan, the family wanted it to be flexible and functional.

A multipurpose room next to the kitchen was fitted with black slatted glass sliding doors so the room could be opened or closed as needed. A pantry, which partially separated the dining room and cook’s kitchen, provided plenty of storage space in the heart of the home where Melissa, cookbook author and recipe designer for Thefauxmartha website, spent a lot of weather.

“I cook a lot for work and for my family. Our kitchen is our hub,” she said. And, “knowing that the winters are long, we wanted to bring in as much light as possible, so we chose an open layout.”

Upstairs, each bedroom was designed with large closets and a laundry room was located next to the bedrooms.

“I believe everyone has a mess, and we just choose where our mess is going to be and that’s the closets,” Melissa said. “And having kids and running through life, laundry is the last thing on your to-do list.”

When building the home, the Colemans made sure to use quality materials right down to the trim and LP SmartSide siding. They took inspiration from design details, like a pitched roof, from the neighborhood.

“There are a lot of elements that mimic what is happening in neighboring houses,” Melissa said.

Since moving in, the Colemans have continued to update the home, including finishing the back yard. They added a shou sugi ban garden wall, designed an outdoor dining area with a floating cedar deck and pizza oven, and created a fire pit.

“We fenced off and segmented the spaces so there was an outdoor living and dining area,” Melissa said. “There are [two] huge trees in the back that we wanted to preserve and that serve as a canopy.”

While the Coleman family have enjoyed living in the house for seven years, with two growing children and the need for an office and a guest bedroom, they need more space. They listed their 1,900-square-foot, three-bedroom, three-bathroom home.

Melissa said the house was designed in such a way that the next person could make it their own.

“There’s a lot of flexible space in the house. In some ways, it’s a blank canvas,” she said.

Listing agent Michael D. Smith said the home, built in 2015, is a bargain because it’s virtually new construction without the higher price tag.

“The buyer of this house is going to benefit from the fact that we built it in a previous building economy,” he said. “Nowadays you can’t build a house of that quality – solid flooring, high quality doors and windows – for that price.”

Housing affordability in the Twin Cities hits worst level since 2004