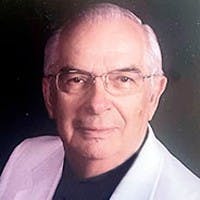 Sorenson, 88-year-old Richard A. “Dick”, of Brooklyn Park, MN, died Saturday, April 30, 2022 at his home. Funeral services will be held at 11 a.m. Thursday, May 5, 2022 at St. Alphonsus Catholic Church, 7025 Halifax Ave, N., Brooklyn Center, with visitation one hour before Mass. Interment will be at Fort Snelling on Friday, May 6 at 12:30 p.m. Dick was born on December 10, 1933 in Fosston, MN to Melford & Daisy (Taylor) Sorenson. He graduated from Fosston High School with the class of 1951, joined the military, and was a Korean War veteran. Dick married June Barstad in 1956. After June’s death he married Maxine Gillen. For more than 25 years he worked for the Fourth Northwestern National Bank in Minneapolis, after which he pursued a career in real estate and did software support for a local church-based company. When he wasn’t working, Dick enjoyed playing his baritone horn with the Brooklyn Community Band and various ensembles with the University of Minnesota Band Alumni. He is survived by his wife, Maxine; his children, Ellen (Ron) of Mounds View, Stephen of Thief River Falls, MN, Mary of Hopkins; and grandchildren, Joshua, Kirsten, Elizabeth and Hannah. He is also survived by the children of Max, Mark, Jill, Karen (Jerry), Matt; and their children. He was predeceased by his wife June; son, Gregory; siblings and parents. Evans-Nordby 763-533-3000 evansnordby.com

Our staff does not correct grammar or spelling. FAQs

Pelosi makes an unannounced trip to meet Zhelensky in Kyiv