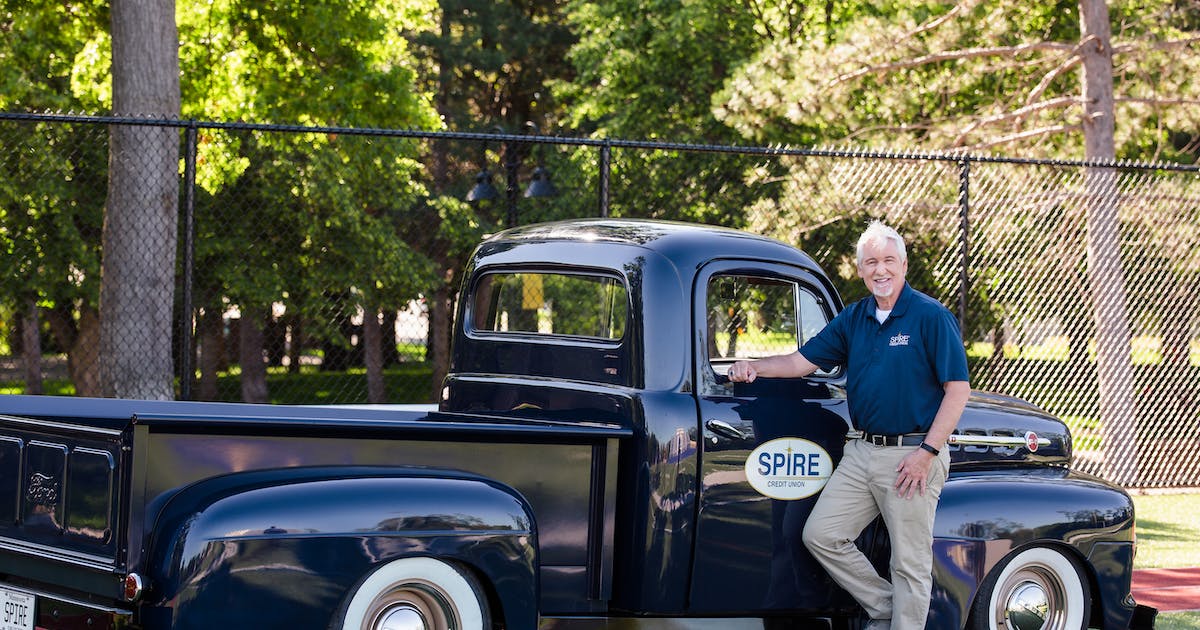 Stoltz, 62, meets and greets at St. Paul Saints games, client and small business home improvement projects, Salvation Army events and other community fundraisers. Since 2011, he has starred with real clients in low-budget, high-profile Spire commercials that focus on finance as human and community development.

“Dan provides better customer service than we do,” said Saints chairman Mike Veeck, also a “fun is good” business guru. “Dan is the CEO down the street. I’m a fan. And look at the numbers that Spire put together.”

Stoltz, 62, an accountant and then chief financial officer, became interim CEO of Spire in 2009 with turnaround orders from the board. Regulators have demanded cuts to retain capital and for Spire’s board to consider merging with a stronger partner after it lost $11.5 million in 2009 due to bad commercial real estate loans linked to the former CEO.

“Thank goodness this board chose Dan,” said Tom Heinzen, current chairman of the board and a seasoned business executive who has called Stoltz a “leader in strategy and building the right culture.”

Stoltz resisted becoming Spire pitch man when Casey Carlson, the vice president of marketing, came up with the idea. The CEO felt he should focus on the bank’s bailout strategy.

“I thought the idea was dumb at first,” Stoltz joked. “But people liked the truck.”

Carlson found the vintage truck online and named it “Archie” after the founder of Spire in 1934.

Stoltz eventually came to the idea that in-house, low-cost advertisements would cement the credit union’s focus on customer service. He has directed 65 commercials which are essentially snippets of hour-long unscripted conversations with clients.

Stoltz credits commercial publishers for making him look good in the 30-second spots.

“We wanted authenticity, not comedy,” said Carlson, a 28-year-old employee who started out as a cashier. “Dan is strategic. He studies leadership and the mistakes of others. He wants… Spire to be like the bank in [fictional] ‘Mayberry. Employees and customers know you.”

Stoltz insisted on developing branches as other larger institutions closed offices to save money.

“A lot of our members want to do business in branches,” Heinzen said. “It’s more expensive. But it’s worth it.”

This above-market growth was aided by 11 mergers with smaller institutions. Spire, with more than 300 employees, is Minnesota’s fourth largest credit union by assets and third by customers, and among the 15 largest Minnesota-based banking organizations.

“I love business, competition and making money,” said Stoltz, 62, who also enjoys public speaking and chatting at events until the lights go out. “But my legacy will be my family and my faith. And to live fully is to give fully. Time, talent and treasure.”

“Dan is the real deal,” said Spire manager and 26-year-old employee Chris Chinn. “Employees love that Dan does commercials with real customers. Unscripted. At annual meetings with 5,000 members and employees, he puts his phone number on the overhead. You have a problem, call him.”

Stoltz received $735,000 in salary and bonus in 2021 for the Spire success — roughly in the middle among credit union CEOs with $2 billion to $4 billion in assets, Heinzen said.

“He could go somewhere else to do more,” he said. “We have people trying to poach Dan…because we’re so successful. He’s a great leader.”

Stoltz has served dozens of organizations, from St. Paul’s Winter Carnival to the Salvation Army, as a volunteer and donor. He was King Boreas Rex at the Winter Carnival and Commodore of the Minneapolis Aquatennial.

He sees successful leadership as being a “go-getter” and a “go-doner”. He is always striving to give more than he has received, or to become a “net giver”, as he puts it.

Former Minnesota Timberwolves and Minnesota United manager Chris Wright recalled having lunch with Stoltz several years ago to tell him that the Timberwolves were ending their relationship with Spire in favor of US Bank.

“Dan couldn’t believe I hadn’t just called him, instead of arranging a lunch,” Wright recalled. “He thanked me.”

“He’s one of the most genuine business people out there,” Wright said. “He delivers on his promise of fairness, respect and fairness. And then good things happen.”