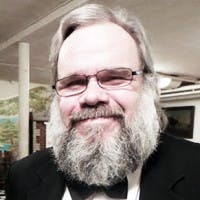 Moore Sr., Timothy K. Tim was born May 3, 1953 (a proud triple Taurus earth sign) in Minneapolis MN to Carroll J. and Gail V. (Hoyt) Moore, and sister Alice (15) and son brother Mike (10) (all of whom were waiting to welcome him home when he left this life on June 7, 2022.) His childhood stories of being the youngest in his NE Minneapolis family were idyllic, despite his asthma attacks. Gail died at age 48 of asthma shortly after Carroll, Gail and Tim moved to south Minneapolis, not far from her beloved Minnehaha Falls. The loss of his mother at the age of 11 darkens Tim’s life. Carroll remarried Connie Johnson and Tim had two sisters: Debra, 2 years older, and Laurie, 6 years younger. Tim made friends in his new community, well regarded at Nokomis Junior High and class leader at Roosevelt HS. He has been active in the local YMCA and served as Lieutenant Governor of the Youth in Government Program at the State Capitol. He enjoyed family time with his sisters and cousins ​​at the Rush Lake cabin, fishing, biking, baseball, and music (Beatles, Rolling Stones, and others far too many to mention. ) His one year at U of M left him with lifelong friends and interests. . Tim married Pamela Lee in 1978. After his daughter Sarah Jane was born in 1979, they moved with friends to the Brainerd Lakes area. Tim sold and taught real estate, and was elected Supervisor of Wabado Township, known for its land management workshops across the state. He began putting his much-admired “radio voice” to work on Brainerd’s WJJY-106. His son Timothy Kevin 2 arrived in 1983 and his daughter Alice Ann in 1986. He often said his biggest wish in life was “to be a dad”. After his divorce in 1989, he moved to the Twin Cities and began a series of customer service jobs, as well as other radio work on KLBB and several versions of “The Mighty 1280, WWTC”. While working part-time at Rivertown Trading/Public Radio Music Source, he met Erin Sim in 1995; they were life partners until his death. He actively attempted to preserve Coldwater Spring and precious oak trees, hosting a fundraising concert called “FOak Fest”. In the early 2000s, Tim suddenly lost 75% of his vision due to angle-closure glaucoma. He retired from the working world, but was still an avid gardener and “snow digger”, bird feeder, conversationalist with crows, cat hugger and creator of dozens of carefully curated playlists. selected from his extensive collection of musical genres, which he turned into gift CDs for friends and family. He was awarded 9th Ward Citizen of the Year in 2006 for coordinating a fundraiser for an injured neighbor. In 2009, he created a 10-minute documentary called “Heroes of 1968” for the MN Historical Society’s annual film competition that year, about meeting his greatest hero (after his father), Harmon Killebrew . The best part of the project, he said, was that Erin and her three children all helped him put it together. In 2010, Tim came up with the idea and wrote the script for a 5-minute film for the MELSA Short Film Competition promoting libraries, and again won “Best Screenplay” for “Out of the Park”, on Harmon Killebrew! Following in his father’s footsteps, he was a dedicated Master Mason (former former Master of a now closed lodge, and recent member of St. Paul Lodge #3, and for a time construction director of the historic Triune Temple.) Over the past few years, the late Swami Jaidev of the Institute of Himalayan Tradition nurtured Tim’s deep well of spirituality and curiosity. Tim listened to hours of audiobooks on a wide variety of topics and considered it “going back to college”. He was delighted with the arrival of grandchildren: Eamon, Kieran, Calvin, Phoebe and Isabelle, and always hoped to share with them his love of bears (teddy and wild varieties) and baseball. His failing eyesight, Covid-19 shutdown and a debilitating series of beatings smothered those goals. Following a collapse in his apartment in August 2021, he moved to Ebenezer Care Center, and brain damage from the strokes led to increasing dementia and poor anger control. Erin, Sarah, TK2 and Alice thank the friends who refused to give up their friendship when Tim’s injured brain tried to drive them away, as well as Nurse Betty, Nurse T, Chaplain Lee Daly and the many other Care Center staff who saw beyond the outbursts to a smart, funny man who just wanted company and deserved to be treated with friendliness and respect. The Hennepin County Hospice staff who have visited and cared for Tim regularly over the past two months have been invaluable to all of us; special thanks to the two Angies, Pam, Julia, Joan, Nick, Treska and the others. Gratitude to potter Denny Sponsler, TK2’s father-in-law, for creating a beautiful, meaningful urn. A private burial will take place later in July at Crystal Lake Cemetery near Gail and her parents. Tim will feel “at home” again. A celebration of Tim’s life will be held on Friday, July 8 from 1-4 p.m. (ceremony at 2 p.m.) at Picnic Shelter C in Wabun Park (closest to the Veterans Home and lock and dam). There will be music (of course), light refreshments and an opportunity to share your memories during the ceremony. Hawaiian shirts are welcome – Tim loved his! The family requests that all memorials be made to MN Pets, mnpets.com. Tim will be missed by his partner of 27 years, Erin Sim; his daughter Sarah Jane Park (Mark); sons Tim 2 (Emily) and grandchildren Eamon, Kieran and Phoebe; Alice Slaikeu (Andrew) and Calvin and Isabelle; sisters Debra Stalsitz (Lou) and Laurie Turner (John) and their families; brother Mike’s children, Tynan and Rebecca Moore, and widow Eleonor Kotkiewicz Moore; Sandy and Mike Alexander, Sister Alice’s “spare family”; and many other relatives and friends.