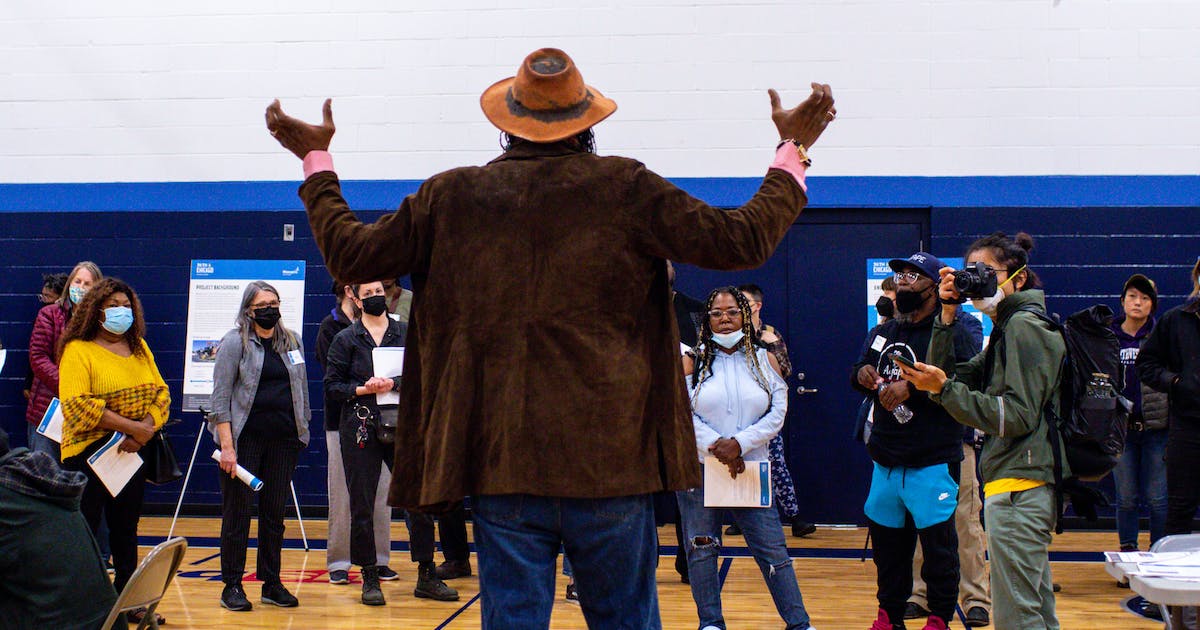 What’s next for George Floyd Square? The City is cautiously embarking on the public engagement process

Almost two years since the murder of George Floyd turned 38and Street and Chicago Avenue into a semi-autonomous protest zone, the city of Minneapolis has begun to determine what’s next for the complicated intersection of culture, business and historical trauma.

“I haven’t fully recovered from this period and I know that we as a community have not fully recovered from this period. I don’t know when we will. I know we have to try,” said City Council Speaker Andrea Jenkins, whose Eighth Ward adjoins George Floyd Square, said Saturday. “It’s important for our own mental health. It’s important for the economic development of our neighborhood.”

Last year, Mayor Jacob Frey offered a permanent memorial to Floyd at the intersection where he died in the custody of Minneapolis police officers on May 25, 2020. Saturday afternoon at the Phelps Recreation Center, Department of Public Works joined elected officials for the first of two town hall meetings this month to discuss rebuilding 38th and Chicago.

About 50 members of the public were in attendance, some of whom were willing to learn more about the process from project managers Alexander Kado and Trey Joiner. But the meeting also showed that raw feelings linger over the shocking event that led to protests and riots in the Twin Cities and transformed this South Side intersection.

A number of attendees, who declined to provide their names, expressed their unease to the town hall. They said they felt the launch of the project was sudden, or they suspected the city was going through a performative process for a plan it already had in its back pocket.

Activists heckled Frey, reminding him of the February killing by Minneapolis police of 22-year-old Amir Locke while executing a no-knock warrant. The ‘Guardians’, who have occupied George Floyd Square since the day of Floyd’s murder and are still insisting the city respond to 24 demands, chanted George Floyd’s name. Anonymous notes left on comment notice boards told city staff to “shut up” and keep the streets closed.

In the aftermath of Floyd’s death, the intersection became the site of memorials, guerrilla gardens, community food drives and concerts. The streets in the area are more than 60 years old, and the improvements were part of the city’s long-term capital improvement plan since before Floyd’s death. Joiner said what happened in 2020 changed the character of the streets far beyond their original design.

“Now it’s two lanes of traffic, no boulevards, 8-foot sidewalks, no space for sidewalk cafes or anything. It’s really built for vehicular use,” he said. he declares. The project is a kind of blank canvas with no top-down plan, said Joiner, which needs public input to balance community healing with traditional asset management and transit improvements.

Joiner expects the reconstruction will focus primarily on the streetscape, but Frey said building improvements aren’t “off limits” either. The former Speedway gas station, emptied during the unrest, covered in murals and renamed “People’s Way” by activists who regularly gather near its pumps, was used in a March kidnapping in which a man was set on fire, according to a criminal. charges.

City staff are in discussions with the owner and leaseholder of the closed gas station to see if they can help develop a transition plan.

“Certain components are more focused on economic development, beyond the public right-of-way. We are very open in the future to what this street, this sidewalk and ultimately this memorial will look like,” Frey said. He added that he was particularly interested in exploring the potential for creating a national park space or monument at the spot where Floyd died. “I think there’s a broad consensus that we want to have an extraordinary memorial that recognizes the legacy of George Floyd.”

Relationships in the square are extremely complex, said Denetrick Powers, co-founder of property consultancy NEOO Partners, who was tapped to lead the community engagement portion of the project.

For Mulualem Gere, who bought a house on nearby Elliott Avenue last year, the reconstruction project represents hope. He said most of his extended family lives in Michigan and they constantly worry about him.

“The region must become a zone of peace,” Gere said. “There is a lot of potential. The city and the community, if they work together, can change the atmosphere.”

The town hall follows a series of non-public “listening sessions” – interviews with small groups of immediate area residents, business owners, civic and religious leaders and activist guardians – which took take place in the previous months. The city declined to identify those selected to participate, but posted a summary of feedback from the listening sessions on its project website.

A rough timeline calls for a “community vision” throughout the summer, with preliminary concepts to follow in the fall and a final concept intended for the spring of 2023. There is a survey on the city’s website asking for comments on project goals and community engagement, at https://www.surveymonkey.com/r/38Chicago_Phase2.

Square Fixture Jay Webb, a volunteer gardener responsible for most of the plantings there, shook hands with the mayor and urged the city to transform 38and and Chicago into a World Heritage Site. He compared the site’s potential to his own work installing plant beds in places damaged by the Troubles.

“We have worldwide attention,” Webb said. “Now is our chance to show the world what Minneapolis is really about.”

4 ways to fortify your retirement against market volatility